Let Them Lead: The Secret to Improving Teamwork Among Your FEC Staff

In this article, Scott Drummond shares a first-hand experience as an example of why offering your team leadership opportunities is the key to to improving teamwork among your FEC staff.

Many years ago, when I was the owner of a children's entertainment center, I found myself struggling to get my staff to work as a team. We had just moved the facility to a larger location, requiring me to almost triple my staff.

With only five years of supervisory experience (and most of it being with high-level professionals), figuring out how to successfully manage a large team of part-time high school and college students who weren't accustomed to long hours of continuous work—or exuding teamwork in a job environment—was not coming easily for me.

I knew I had a lot to learn (and quick) if I was going to be able to compete in the industry.

Open to any and all advice that would help my seemingly lackluster team work together as a successful and productive unit, I quickly turned to TrainerTainment’s workbook and DVD set, A Guide for Easy Team Training.

Upon completion, I called an all-hands meeting and delivered a spot-on recount of all that was necessary to make a great team…or so I thought.

No matter how many times I followed up with checklists and constant reviews of work performance of the next few months, I was still faced with an unmotivated and under-performing staff. No one would do the things I asked, and if they did, it was always done without full effort.

At a loss for direction in how to move forward, I just gave up. Yes, you heard that right—I GAVE UP. In a moment of intense frustration, I told my Assistant General Manager to have an all-staff meeting at her house and have them develop a plan for how we were to be successful.

In full disclosure, I never thought she would actually do it. In my mind, I thought this request would shock my team into obligatory team bonding and productivity.

But my second-in-command took it and ran with it. Within a few days, they had a team-building pizza party at her house, and she let the staff run the entire meeting. She handed them the training workbook ( the one I'd been trying to force them to follow for weeks-on-end) and asked that they review its contents to see if any of it made sense for the organization.

To say I was not optimistic about the outcome of their team-building event would be an understatement. If I, as the owner, couldn't get them to display teamwork and be motivated to complete their tasks, I had very little hope they could successfully solve this problem themselves.

Letting Teamwork Do The Work

About a week later, I was invited to a mandatory staff meeting. I'll admit, I was slightly taken aback when I heard I was being "summoned" to a meeting by all individuals I employ.

When I arrived at the meeting, I was told to sit at the side of the table. A few staff took my normal position at the head of the table.

For the next 45 minutes, I listened to each of my employees describe the actions they were going to take to improve their teamwork, day-to-day operations, and guest experience at our facility. I heard them describe in detail how they would help each other, promise to train each other, and commit to holding each other accountable.

Was this really the same staff? Before my very eyes, they were saying ALL the changes I'd been trying to enforce over the last several months.

I just sat there and listened to a team with a solid bond, who knew how to work together to achieve their goals—and mine. It was the most amazing display of teamwork and team bonding I've ever seen.

From that day forward, all I had to do was ask them how their goals were coming along and what I could do to support them. They had set goals as a team, and they were holding each other accountable to reaching them as a team.

They created standard processes for training new hires and stuck to them, ensuring that every employee had the same positive on-boarding experience. (I will note that their training method looked eerily similar to the one from TrainerTainment I'd given to them from the beginning, but that can be our little secret.)

With a strong team bond and processes in place, I was finally able to turn my attention to other priorities, and my facility began to operate smoother than ever.

It took me a long time to finally realize that to improve teamwork among your facility staff, you have to let them lead.

It wasn't my staff’s fault they were lacking in motivation, it was mine.

This group of young adults I employed were silently begging for leadership opportunities.

It was evident to them through my micro-managing behavior I didn't trust my team to succeed, so why would my team put in more than the bare minimum effort? Teamwork requires communication, having responsibilities to hold each other accountable for, and the ability to create new processes when something isn't successful.

Once I decided to loosen the reigns a bit and let them lead, they stepped up to the plate. And their teamwork made all the difference.

The best way to create a successful team is to entrust some of the process to the very team members themselves.

Find a task or two and fully give the responsibility to a few of your young staff members. Communicate to them only your desired results and ask them to create and execute a plan to get there.

You'll be amazed at the amount of teamwork you'll witness, the pride they take in the business, and how infectious is for the entire staff.


Interested in additional insight for how you can help your team improve guest experience at your facility? Contact us to schedule a demo and see how Party Center Software can help your FEC with online bookings and waivers, employee scheduling, vendor management, and much more. 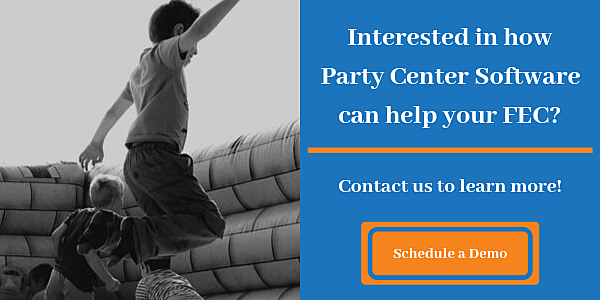 Does Your Leadership Culture Serve Others?

4 Keys to Successful Team-Building Events at Your FEC

In this article, we share 4 keys to hosting successful team-building events at your Family Entertainment Center.

4 Hiring Tips to Help Improve Customer Service at Your Facility

In this article, we share four hiring tips to keep in mind if you want to have effective team members who provide exceptional customer service.

Be the first to know about new articles, insights, and tips to help you grow your family entertainment business.